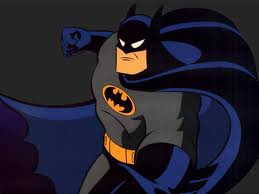 I have a secret confession to make. I love Batman. I always have.
I'm not talking about a secret crush on Adam West or Val Kilmer, or even my old E.R. heartthrob, George Clooney.
I'm talking about the comics and the TV show with the caped crusader, the Batmobile, Gotham City, and of course ... the Bat Cave. Oh how I longed to be a fly on the wall of Wayne Manor.
The show started on this day in 1966, and TV has never been the same for me. Never since have my brother, Tim, and I gone to the lengths we went to for any other TV show. We risked life, limb and reputation for our love of that show.
Even though Batman was my favorite, my brother and I were equal opportunity superheroes, and we also gave Superman and Batgirl some air time in the back yard and in the vacant lot next door.
I think I still have shoulder scars from the safety pins that held my cape. My mother was constantly missing her best towels and scarves. There are probably still bits of gravel in my knees from jumping off the backyard fence and the picnic table with my cape.
I'm pretty sure that Super 8 footage still exists of some of my brother's flying leaps. We used to beg my dad to run the projector backwards, and there's nothing like a dive from the top of the swing set in slo-mo.
I loved the power and freedom that I felt when I got a good sprint going and my cape snapped in the wind behind me. And I'd still take Batman's utility belt over my cell phone any day.
Now I need to go do some yoga stretches or something. I've got to stop jumping into my Honda like it's the Batmobile. But I'll be back tomorrow. Same bat time. Same bat channel.
Posted by Annie at 3:02 PM

I'm the same way with Wonderwoman.

The neighbor girl down the street used to say she was Wonderwoman, and she'd try to get all of the neighbor kids to call her that, too!