I am always saying, out loud and in print, what a solitary life it can be as a writer. No doubt, Hemingway's bare bones existence in A Moveable Feast would have been considerably changed had he had social networking.
Would he have still gone to that cafe? Or would he have just consumed mass quantities of wine and oysters in the comfort of his own icy apartment while seated in front of his Facebook screen?
And would Gertrude Stein still have invited him over to 27 rue de Fleurus, or would she have been too busy Tweeting or blogging to talk about books with the likes of him?
He wouldn't have been nearly as lonely had he been in the Class of 2k9... I gave my take on writerly togetherness over at our new blog this morning.
Also, look for another video blog from Jame Richards and me in the next week or so. The critique group is showing up at my house this weekend. I love that they will travel miles for good dessert and stories! Jame and I might be able to convince a few guests to join the vlog. And Jame, if you are reading this, I just had this great thought...now that we have had Andrew Gutterson on The Backstory, teaching us how to beat box...maybe we could get a few of our writing peeps to give it a shot!! Oh...maybe I shouldn't have said anything...now they'll be prepared with lame excuses...
And speaking of Jame, I absolutely love the hilarious "Francisisms" that she posts on the sidebar of her blog. In the true spirit of Francis, I need to share some recent quotes from a couple of my first graders:
I am grabbing a pencil from my desk, and as usual, someone follows me...(by the way, I don't know why the school office furniture people bother to provide a chair to go with a first grade teacher's desk. It's just a place that I put my purse...)
Anyway, I'm grabbing the pencil and I hear, Mrs. Leal? I have a paper cut. Can I have a Band-aid?
Sure, I say.
Then he sighs with relief and says, Good! 'Cause I can see my bone sticking out.
Then, same week, but different kid:
Mrs. Leal? Can I tell something to the class?
Is it your sharing day? I ask.
She shakes her head. No, but it's really important.
Okay, go ahead, I say.
She stands at the front of the room: I have something to tell you guys. My dog is getting tutored tomorrow. Does everyone know what that means?
I hold my breath and get ready for damage control, but then thank God for the kid that always calls out. He says, Isn't that like getting a shot?
She nods her head importantly, Yep. It's like getting a shot.
I'm certainly glad I don't need to be tutored right now, because I hate shots.
Posted by Annie at 1:59 PM 4 comments:

It had been not quite six months since SCBWI (Society of Children's Books Writers and Illustrators) Los Angeles, and I was having serious withdrawals...I couldn't wait to get to New York and see my Seattle friends.
I am originally from the Seattle area, so when I see the Seattle SCBWIers, I feel
like I'm back in the old neighborhood. My purple stingray with the high handlebars and the banana seat may be gone, but the people are just as awesome. You've got to love people who will go on a cupcake quest with you late at night in Greenwich Village when it is about thirty below zero! 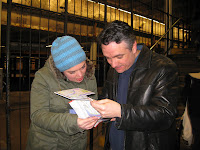 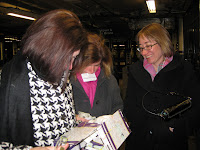 We may have looked lost, but we were just huddled in the subway to get warm! On the left is the talented Jaime Temairik, aka, Cocoa Stomp and my 2k9 sister, Sydney Salter's husband, Mike. (Does that make him my 2k9 brother-in-law??)
On the right with me are my East Coast pal, Penny Piva, aka, sweetbrownpoison, and Sydney. 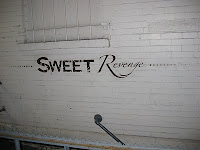 We finally found the elusive cupcake place and even though we were all suffering from hypothermia, it was definitely worth it! 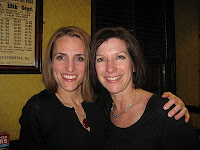 there I am with the wonderful,
Jolie Stekly, aka, cuppa jolie. It was the third anniversary of our friendship which spans over three thousand miles! Ours is kind of a twilight zone friendship where we led practically parallel lives for years, until three years ago when we finally collided at the writer's intensive at SCBWI New York! 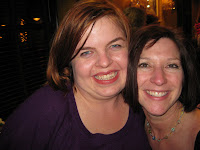 On the right is me with the amazing Kim Baker. Kim doesn't know it yet, but I might be sneaking into her Seattle conference in April...I have a family event a few days later, so really, how could I not go? It's a weird kind of writer peer pressure...you know you want to go...everybody's going...the next thing I know, I'm looking for plane tickets and filling out the conference form... 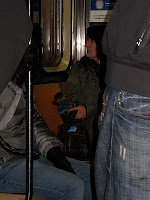 Looking pensive on the subway is my vlog partner, Jame Richards.
Both Ja(i)mes are amazing, and I can see as it
would be easy to confuse the two...
Jame Richards writes historical fiction and vlogs with me...

Here is her book...
Jaime Temairik has never vlogged at my house,
but I have her wonderful art on the wall in my house. It makes me happy every time I walk by it. 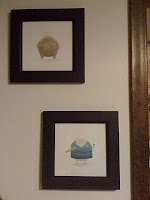 You can buy it on Etzy.com and you can
see her latest creations on her
blog, CocoaStomp. Come on, go there;
you know you want to...
When my parents tried to teach me about avoiding peer pressure, I'm sure they had no idea how persuasive writer friends can be. One second you are safely in your toasty warm hotel room, and the next second you are forming a posse on the subway in subzero temperatures. I've always said the writer's life was solitary, but not when you are at SCBWI...
Posted by Annie at 3:39 PM 2 comments: 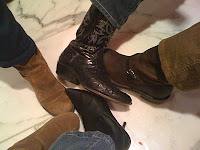 I am pulling out some of my mad first grade teacher skills and asking the question, can you identify the owner of the boot? Which author/illustrator/artist belongs to each boot? And no, Penny, it's not the same as the Sesame Street question, "which of these things doesn't go with the others"...
Well? Put your wild and not so wild guesses in the comment section.
If you would like a few hints, click on this for a video edition of The Backstory. (If you missed Part I, you can go to the blog post before this and click on "video blog"...)
Posted by Annie at 7:22 AM 4 comments: 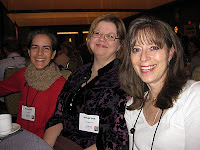 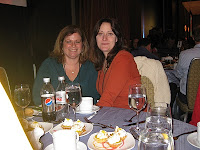 e Society of Chidren's Book Writers and Illustrators) New York last weekend!
I got into town a little early for a book signing with some of my Class of 2k9 siblings, along with Ellen Hopkins, at Books of Wonder... 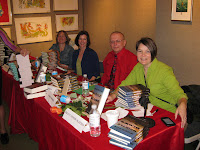 Seated are Sydney Salter (MY BIG NOSE AND OTHER NATURAL DISASTERS, JUNGLE CROSSING) me (ALSO KNOWN AS HARPER), Albert Borris (CRASH INTO ME), and Fran Cannon Slayton (WHEN THE WHISTLE BLOWS). 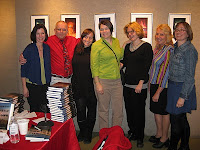 Standing in picture on right are me, Albert Borris, Lisa Greenwald (MY LIFE IN PINK AND GREEN), Fran Cannon Slayton, J.T. Dutton (FREAKED, STRANDED), Ellen Hopkins (CRANK, BURNED, GLASS, IDENTICAL and TRICKS), and SYDNEY SALTER.
The next afternoon, I had a little down time, so Jame Richards (THREE RIVERS RISING) and I decided to make another video blog. I was worried that Jame might still be mad, because in our last vlog, I may have insinuated that Nancy Drew was historical fiction. Since Jame writes historical fiction, she might have taken that a little personally...you be the judge...does she look a little miffed? ...or is she just concentrating on the beat boxing lessons we were taking? It all goes to show you that anything can happen if you find yourself with five minutes of down time at SCBWI New York...
Posted by Annie at 6:24 PM 2 comments: