We All Need a Little Help From Our Friends 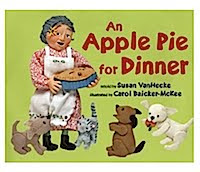 Who doesn't need a little help from their friends? Those of us who know Susan VanHecke as a music journalist and the co-author of ROCK 'N' ROLL SOLDIER wouldn't be surprised to see her pen a story about the Beatles. In AN APPLE PIE FOR DINNER (Marshall Cavendish, 2009), Van Hecke journeys across genres to the English countryside.
True, it is the English countryside, but the Fab Four are nowhere in sight. What VanHecke does have is a delightful cast of characters. Based on the English folktale, "The Apple Dumpling", VanHecke makes the story her own, using the universal themes of friendship and working together to take care of the needs of others. As Granny Smith sets out to make an apple pie with nothing but a basket of plums, she makes trades along the way to ultimately get what she needs and a whole lot more.
The illustrations by Carol Baicker-McKee are whimsical and unusual. Done in 3-D, the mixed media bas-reliefs make a perfect compliment to VanHecke's visual setting. I found myself wishing I could be a fly on the wall of the art studio to watch that world come to life.
As an elementary teacher, I've found that stressing the need for empathy as well as just a desire to help out our friends and neighbors is something I hope to get across to my young students all year long. Susan VanHecke has done this so well in AN APPLE PIE FOR DINNER. I would highly recommend it to parents and teachers, alike.
Please read on for interview with the multi-faceted, Susan VanHecke... 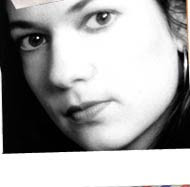 A picture book seems so completely different from what I’ve seen you do. Is this something you have thought about doing for a while?

You know, I never even considered writing children's books until I became a mom. Four years ago, when my kids were 2 and 4, I was reading a ton of picture books. Some I loved, others I thought were pretty lame. So I thought I'd give it a try.

Coming from the world of grown-up book publishing, I knew I'd have to streamline my writing style. To practice, I took several of my favorite folktales and retold them. I tried to use as few words as possible, and tweaked details – characters, settings, action – to update the stories.

An Apple Pie For Dinner was one of those exercises. Marshall Cavendish bought it as an easy reader and asked fabric artist Carol Baicker-McKee to create the amazing 3D bas-relief illustrations. I never, ever dreamed that my less-is-more writing exercise would become such a beautiful picture book!

You have written a lot about the music business and rock and roll, in particular. Are you a musician?

I come from a musical family. My mom is a church organist, choir director, and piano teacher. My dad has a beautiful tenor voice and sings all the time at church. My older and youngest brothers play drums. My other younger brother is a professional guitar player. I took piano lessons for many long years growing up, and also played clarinet and bassoon in school band.

While I was studying film at New York University, I did an internship at Island Records, then went to work at a music industry PR firm in NYC after graduating. There, it finally dawned on me that I could actually make money doing the thing I loved most – writing – about a topic near and dear to my heart – music. I became a freelance music journalist, an article turned into my first book, and it kind of took off from there.

I must confess, though, that I haven't touched a piano – other than to dust it – in years!

You must have come across some interesting people while doing your nonfiction research work. What is one of the most memorable things that you discovered?

While working on The Girl In The Box, my historical fiction for middle-graders, I learned that my ancestors in western New York were abolitionists. Not only were they abolitionists, they were "stationmasters" on the Underground Railroad, hiding fugitive slaves under their farmhouse and in a swamp on their property. This was at the time of the Fugitive Slave Law, where harbored runaways were considered stolen property. My relatives risked their livelihood, prison time – perhaps even their lives – to help slaves to freedom. It still blows my mind, and makes me so proud.

You mentioned on your website that you often work with a co-author and help people tell their own stories. What is one story that has stuck in your mind?

Actually, I worked on two books back-to-back that touched me deeply. The first was Roadwork: Rock & Roll Turned Inside Out, the memoir of rock photographer Tom Wright, who befriended guitarist Pete Townshend at Ealing Art School before Pete formed a band called the Who. Tom would go on to travel with the Who and other famous rock bands – the Stones, Faces, Joe Walsh, the Eagles – shooting the most extraordinary pix (now a part of the collection at the Center for American History) and developing them in hotel bathrooms.

It was probably inevitable, but Tom wound up with a major drinking problem. There's a point in the book where he's sleeping on the gravel floor of a friend's garage, living on red wine and cigarettes, estranged from his wife and son, questioning his art and his life. Such giant talent, such enormous sadness. Thankfully, Tom pulled himself together, but re-living that time with him was very painful.

After Roadwork wrapped, I went straight to work on Rock 'N' Roll Soldier, a Vietnam War memoir for young adults I co-wrote with veteran Dean Ellis Kohler. The things those young soldiers – teens, a lot of them, like Dean – were forced to see and do just broke my heart. No wonder they didn't, and still don't, want to talk about it. It's indescribable.

Dean had repressed some devastating memories and I hated having to make him relive them. On the other hand, my hunch is that our dredging up those experiences together and making them public, sharing them, trying to make sense of them via the book, might have actually been helpful (Dean's such a stoic, I'm not sure he'd tell me if that were the case or not).

Regardless, our veterans – of all wars – deserve our utmost gratitude for what they've endured and sacrificed for our country.

THE GIRL IN THE BOX has such an intriguing title! Can you tell us a little about it.?

It's based on the true story of a 7-year old slave girl who, with her pregnant mother, hid for 21 days in a wooden box in the back of a horse-drawn produce cart as they were smuggled from the Washington, D.C. area to Warsaw, New York. The plan of those who helped them was, no doubt, to get them to Canada. But when they arrived in Warsaw, the mother gave birth to a son – in my ancestors' kitchen! – then died soon after of tuberculosis.

Since there was no way an infant and a 7-year old, both considered fugitives, could fend for themselves in Canada, the Warsaw townsfolk rallied around the children and raised them as their own. Like all who assisted runaways at that time, these people were putting themselves and their families at great risk in order to do the right thing.

The girl grew up to become a beloved member of the community and married a cousin of W.E.B. Du Bois, civil rights activist and co-founder of the NAACP. It's really an incredible story.

The research for this book has been especially challenging, though, as not many records were kept regarding the Underground Railroad. It was just too dangerous for all involved. So I've been digging extra-deep – which I really enjoy. I almost turned a cartwheel when I discovered the pair's actual "runaway" advertisement in an 1850 newspaper!

If you weren’t a writer and editor, what would you be?

Maybe an architectural historian. I'm a sucker for old houses, have renovated two. I live in an historic neighborhood, and want to adopt every "stray" home in the area – you know, those grand old beauties that just need a little love?

For fun, I like to research the homes' histories – who built them, who owned them, who welcomed new babies and saw relatives off to war and celebrated graduations and weddings in them. I know, it sounds a little crazy. I'm a certified research-aholic!

I love you books and will recommend or give this holiday season. Keep writing@!