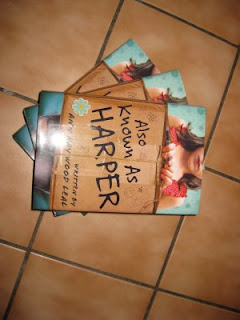 Happy Birthday, Harper Lee!  Today she is 83.  Thanks to my friend, Waterford Public Library children's librarian, Nadine Lipman, for letting me know!
My biggest reader's dream is that Harper Lee has several rooms full of manuscripts in her home in Alabama, just waiting to be shared with the world.
What made the month even better, was I received a package on my doorstep from my editor at Henry Holt:  preview copies of ALSO KNOWN AS HARPER.  It felt very surreal to hold the actual hardcover in my hands...
I took ALSO KNOWN AS HARPER to school to show to my first graders.
"It's coming out on May 26," I told them.
A few looked mildly interested.  Most just kept working on their drawings.
Then one boy raised his hand.  I got really excited for about half a second, thinking they might actually be interested in my writing process.
"Yes?" I said.  "You have a question?"
He looked toward the windows.  "When's P.E.?"
Oh well.  Back to more important business.
About an hour later, a boy came up to my desk.  "Mrs. Leal?  You want to hear something?" he asked.
"Of course I want to hear something," I said.
"It's really exciting."  He bounced on the balls of his sneakers.  "My book is coming out today!"  All I have to do is finish the front cover and staple it on, and it's done!"
Wow.  Things move quickly in the first grade publishing world.
Then the very next day:  "Mrs. Leal?"  The same boy sat down at the reading table with me.  "Remember when I told you I had a book coming out?"  He paused for effect.  "Now I've got three."
A triple book deal.  Maybe I should give him my agent's number...
Posted by Annie at 8:52 PM

Being an author is so easy. I've started a newsletter, pretty much about myself and what I think about and eat and wear. And what I might eat later.
I've handed my newsletter out in front of my building and it's cool because people throw it down on the ground in case someone else wants to read it.
I think the next newsletter will be about weather we've had. And funny stuff like that.

Where might I get a perscript--I mean SUBscription? Is is expensive??

I was thinking about that little boy with the three book deal---I want HIS agent's number!

I'm so happy for your brother that he lives in a deeply caring part of the world where others are committed to sharing the joys of the written word.

Congratulations on your book! Micah has been telling me about this for awhile and last night I found your website and realized he was for real :) Thats really great! and seriously....he has been talking about it!

Too funny.
I can relate to the uber-excited kids. My own just want to know when dinner's ready;)