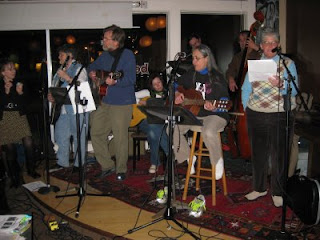 Last Saturday marked the Hoot for Hunger at the Bean and Leaf  coffee house in New London, Connecticut.  Local musicians banded together (okay, bad pun) to raise money for the Homeless Breakfast program and for the Community Meal Center (the soup kitchen).
That is Sherry Stidfole (former Connecticut Music Teacher of the Year) and "The Crew" performing in the finale.  $720.00 was raised, thanks to the performers and to the generous proprietor and the patrons of Bean and Leaf.  (That's me, seated, trying to blend into the background.)  I can be coerced into such things, if it's for a good cause, but I rely heavily on the people in the crew, most of them members of the Shoreline Acoustic Music Society.
Some sad news...Albert Borris, fellow author (CRASH INTO ME) and 2k9er, is seriously ill and suffered a stroke this week.  Albert doubles as a high school counselor, dealing with drug and alcohol abuse, in New Jersey.  He has an amazing heart and, as they say in New England, a wicked sense of humor.  Albert can tell a great story--a recent favorite of mine was when he was mistaken for John McCain when he was volunteering at an Obama rally!  (For those of you who don't know Albert, he doesn't have a lot of hair...)  I know Albert and his family would appreciated your prayers and positive thoughts.
Posted by Annie at 7:10 AM

Is there are place we can send thoughts/prayers/well-wishes for Albert?

Albert has a facebook page, but I also have his address; I can e-mail it to you!