Isn't that just a story waiting to happen? 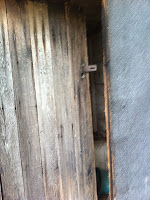 Even if you weren't a writer, wouldn't this picture make you want to grab the nearest writing utensil and get down a story? Once again, I was venturing where I really wasn't invited...but there wasn't anyone there to invite me onto the property...or was there??
Luckily, I have a good friend, Doug, who happens to be a horror writer, and who gladly agrees to stop for pictures such as these. It was going to be a quick photo, so he stayed in the car. I realized later, he was just using the time to drum up material to scare me. I got back in the car and he said, "It was just like Rear Window. I think I saw someone looking out of that top window at you..." He said it calmly and matter-of-factly,
which reminded me of one of the reasons he's such a good writer. It was a little tidbit...just enough to get the hair on your arms standing up.
I would like to show a full picture of the house, but then you might see the sign that was un-inviting me onto the property...
When I looked at the picture on my camera later, I realized it was straight out of my friend's newly re-released novel, NEVERLAND. I was right in the middle of reading it, and it was as if part of the setting had popped right out of the book at us.
Here's another picture just begging for me to tell its story.

I love anything that is unlikely, like something inside that should be outside, or vice versa. I am also completely inspired by anything that is broken down and decrepit. It makes me wonder what went on there, who lived there, and what their story was.
Doug and I are going to be talking about story, etc. on Wednesday, November 17 at 7:00 at the Groton Public Library in Groton, Connecticut. If you are in the area, we'd love to have you stop by. We are both going to have some fun give-aways, so I hope to see you there!
Posted by Annie at 6:22 AM No comments: 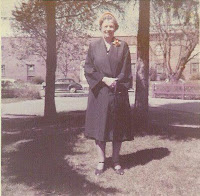 She couldn't carry a tune, but she sang out loudly and proudly. Her singing voice may have been off-key, but I could listen to her talk forever. I can still hear the rhythm of her voice as she recited a poem for me.
My grandma always had all the time in the world for me, and she answered every one of my annoying kid questions, happily and patiently. She was an object of fascination. She would take her false teeth out on command, and she'd hold them out and up close so my brothers and I could get a good look.
I remember waiting for her train to come in. I would stand next to the platform with my mom and my brothers, straining to hear a hint of her arrival. Her arthritis was bad, and the train conductor would have to help her down the clanging metal steps. I can still picture her black t-strap shoes as they appeared on the bottom step.
The pain from her arthritis must have been excruciating at times, but she always smiled through it. It took her several tries to get up from her chair. I would stand next to her, and rock back and forth, encouraging her to make it to a full standing position. Then we'd both cheer when she was upright.
She was born without the fingers on her left hand, but she wore no prosthesis. She used to say she could do anything except pound a nail. I loved how that hand felt in mine. It was just the right size to fit in my little-girl hand.
She was strong when most people would have given up. She taught in a one-room schoolhouse in the late 1920s, early 1930s, and sometimes she would need to stay overnight to keep the coals going through the cold North Dakota winters. Two of her babies died before they reached the age of five, and I can't imagine what that must have been like for her--waiting to bury them until the ground thawed.
My grandpa died when they still had young children at home, but she kept moving forward, raising and protecting her family. She was a hard worker through tough times, and once chased an intruder off her property with a rifle. She took in boarders to help make ends meet, but she was always willing to share what she had. Sometimes the sheriff would deputize her during the holidays so she could take an occupant of the small town jail home for a nice dinner.
The Lutheran church she attended let the men go up first for communion. Grandma went up with the men, and ignored the whispered comments and stares. She had to get to her restaurant job at the Percolator, and she had no time to waste. She had a family to feed.
My grandma was ahead of her time, and I'm sure she was looked down on back then, for some of the decisions she made as a woman. What an example of strength and patience and compassion she set for me and for my brothers. I'd give anything to be waiting to hear the clang of those black, t-strap shoes on that train platform again.
Posted by Annie at 5:08 PM No comments:

We Were All a Long Way From Home

Moving 3,000 miles away from Seattle was unsettling, to say the least--scary, even. I quit my teaching job and we packed up the Honda, with as much as we could fit around my ten year old daughter and my five-week-old baby girl. The rest of our possessions were busy getting lost and broken in the moving van.
When we got to Connecticut, I found the grocery store and the gas station, but had yet to find the freeway. Two days later, my husband climbed down the hatch of USS San Juan and left the pier.
It was about a million degrees in our tiny rental house and I desperately needed to find an air conditioner. But where was the downtown area? My neighbor was out in her yard. Downtown? She just laughed like I'd told a really good joke. I could try to locate our fan, but I was positive it was busy getting broken in the moving van somewhere between Seattle and Connecticut.
My husband had arrived before me and probably at least knew how to find the freeway, so maybe I could call him. Wait...no underwater phone. I wouldn't be able to see him or talk to him for five months.
Then the phone did ring and it was someone named Meghan. Her husband, she said, was underwater with my husband, and did I need anything? She didn't even wait for me to answer. She came over with pizza and Lee-Hannah, another wife. They were the first to baby-sit my new baby, and the first to help when three months later, our husbands were still underwater and my oldest daughter needed emergency surgery.
Please don't forget to thank a Veteran today. But I've also got to include all those Navy wives and Navy husbands out there!
***********
Thank you so much for those who entered my A FINDERS-KEEPERS PLACE contest! Winners, your prizes are on their way...
***********
My TeensReadToo Blog appearance mentioned in a previous post has been postponed until December 4. Please don't forget to stop by!
***********
Last, but definitely not least, I have to mention former Air Force man, Lionel Haywood. My dad survived a heart attack last week and is looking better than ever. I love you, Dad!
Posted by Annie at 7:23 AM 2 comments: