"Where's Dad?" My almost-fifteen-year-old shifts nervously from foot to foot as she puts on her 350 pound backpack for school.
"He's running," I say, unsure why this news is causing her so much stress. He's the one out pounding the streets at dawn.
She glances at her phone and her face looks even more distressed. "It's 6:25, so you know, he'll be running by the bus stop!"
"No, he won't," I say, unconvincingly.
She bites her lip and heads out the door.
Not five minutes later, my husband bursts through the front door in his Lance Armstrong shorts. "I went by the bus stop," he says.
"Oh, no..." I say.
He casually grabs some water. "There were two boys there, so I said, 'Good morning, Everyone.'" (Just trying to be polite, I'm sure). "And to you, too, Holly."
At first, I think he might be just kidding, but then he says, "The boys answered, but Holly said nothing."
Oh, I'm sure she'll be more chatty next time....if there is a next time. Holly's probably on her ever-present cell phone right now, making arrangements with one of Tony Soprano's friends for a mysterious hamstring injury...
Favorite first grade quote of the week: We were making handprints above our poems for Mother's Day. One of the kids pauses and looks very intently at his. He points at the middle of his hand and says, "I recognize that--that's my romance line."
Posted by Annie at 6:38 AM No comments:

I didn't want to leave. I was in a place where everyone treasured books. As far as the eye could see were people who lived, breathed and wrote books! Over 5,000 people attended the 2nd Annual Hudson Children's Book Festival, an event so well-run, people are already using the word, "legendary" when they talk about it. 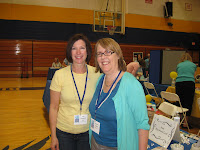 Here I am with my Henry Holt sister, Jeannine Atkins. I was exhausted at the end of our festival day, but I couldn't put down her beautiful book, BORROWED NAMES. As soon as I opened it up, I was drawn into the incredible lives of Laura Ingalls Wilder, Madam C.J. Walker, and Marie Curie. Jeannine has profiled their lives and their relationships with their daughters with stunning clarity in the form of poems. One of the things that make these poems so unusual, is they are not just about the history-making moments of the lives of these women and their daughters; they are about the regular moments that made them who they were.
(In case that wasn't enough to draw you in, I'll give you a few of Jeannine's own words in the voice of Rose Wilder..."She turns to sort through what might be saved. A wilderness of cracked china, ashes, days when safety was as common as a roof. She folds her black wedding dress and tells Rose, You did nothing wrong. But then she whispers, We won't speak
of this fire again."
I couldn't quite catch my breath after reading that part. I told Jeannine I was adding another star to her already-starred review! 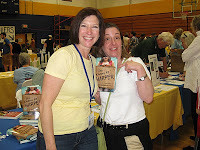 It was great to spend some time with the amazing Susannah Richards! She knows absolutely everything there is to know about
books and the people who write them; I could talk to her all day long! 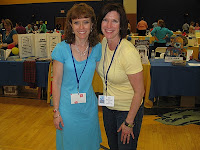 Someone I wish I could have spent more time with
was my dear friend, Rose Kent, author of KIMCHI AND CALIMARI. I got to see the Advance Reader's Copy of her new book, ROCKY ROAD. (I tried to slip it into my bag, but I'm pretty sure she was on to me!)
Later in the afternoon, I got to do a panel with the fabulous Jo 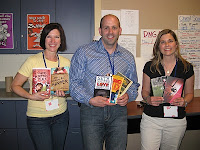 Knowles
(LESSONS FROM A DEAD GIRL and JUMPING OFF SWINGS) and the wonderful Eric Luper (BIG SLICK and BUG BOY). I love the title of Eric's new book due out next month: SETH BAUMGARTNER'S LOVE MANIFESTO!
But the best part was when Eric noticed a piano in the room...so of course he decided we should do a music video...
Stay tuned for Part II and more Hudson...
Posted by Annie at 6:28 AM 2 comments: